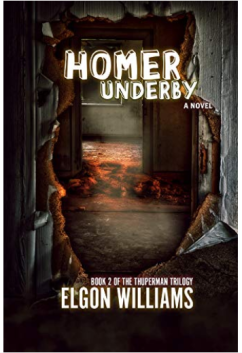 Recently, I had the opportunity to interview the wonderfully creative author Elgon Williams. His newest book, Homer Underby, is the second book in the Becoming Thuperman series and is available here.

Nola: How would you describe your books to a reader unfamiliar with what you write?

Elgon: Anything is possible, though the books are deceptively realistic fantasy. I’m told the dialogue is what drives that. My characters exist in a universe I’ve fashioned over the years that borrows some of the rules from our universe, though not everything. Magic is real, just only the people with magic inside of them know about that – same as in our world.

Nola: What book have you read that really stuck with you? Why?

Elgon: I was reminded of LOOKING INTO THE SUN by Todd Tavolazzi because it’s audiobook just came out recently. I read it a couple of years ago. It’s a story about the Syrian Conflict, told in a gripping way that’s hard to forget.

Nola: What underrated book do you think everyone should read?

Elgon: By underrated, I guess you mean an undiscovered gem. There’s a German author who writes Viking romance novels. I never realized that was a genre, but it piqued my interest. She writes beautifully in both English and German. Her name is Sarah Dahl. Take your pick of stories. They’re all good.

Nola: Your books have some wild characters and plots. What do you draw from for inspiration?

Elgon: Like every writer out there, some of the oddest things inspire me. I’ve had several muses. One is responsible for my Wolfcat Chronicles series. She’s a real person, just we have never met in person. We came close when I was in California, but our schedules didn’t mesh. It will happen eventually, though. What inspired me about her was her unique view of the world. Despite having a rough go of it, she is one of the most positive people I know.

Fried Windows erupted from an attempt to write a poem about my childhood. As bright and positive as most of that book is, personally I was going through a dark time. So, writing it was cathartic.

The Thuperman Trilogy began as an idea the appeared in a conversation between two characters in another, as yet unpublished, manuscript. It simmered and bubbled in the background waiting for me to be on a bus in Normal, IL. I was text messaging with a friend, giving her a progress report on my trip. She asked where I was. When I told her, she said, “Oh, you’re nowhere near normal, Mister.” I decided, what a perfect place for two budding superheroes to live.  I wrote it the following summer while I was waiting on the edits for FRIED WINDOWS.

Nola: When you’re writing, do you focus on trends in the publishing world that “sell,” or do you write what speaks to you regardless of sales trends?

Elgon: I know some authors try to do that, write to the trend. Maybe that’s why some are more successful than others. But it seems to me that you’d have to be a lot more prolific than I am to crank out something to match whatever the current fad is and rush it through editing before the demand faded. Alternatively, it would be great luck to anticipate a trend and write for it, timing it just right. As bizarre as my mind is, it doesn’t work that way. I write what wants to be written, because if I don’t there is a real danger I’ll explode.

Nola: What conferences or Cons have you gone to, and what were your take-aways as a writer or marketing director?

Elgon: I’ve attended several fantasy related cons, like Mega Con in Orlando and C2E2 in Chicago. Those are huge events with lots of distractions, cosplay and just plain fun. A new author should go to those with the expectations of making some contacts and gaining some exposure. Smaller venues are better suited to building relationships with readers, pitching and selling a few books. Writers should focus on conferences in their genre, doing workshops, and sitting on panels – that sort of thing. That’s useful in establishing your credibility as an author. If your genre fits into a convention’s theme, you have a better chance at covering your expenses. Having said that, the last day of the con is where most of the buyers are, but the bargain hunters are also out in force, looking for someone desperate to avoid hauling boxes of books home with them. As a marketing director, I’d tell you to set specific goals for whatever you decide to spend your money on. Your primary goal is always to gain exposure for your work and establish a strong brand.

Nola: Most writers have tons of book ideas floating around in their heads. How do you decide which project to tackle next?

Elgon: Whichever idea shouts the loudest gets my attention. But that doesn’t mean the others get left behind, just that they need to develop a louder voice. Sometimes you write things that end up unfinished. But then you go back to it a few months or years later and finish it. That happens a lot with me. Also, some of my ideas twist and converge with others and the result is a better story.

Nola: You have an adorable new grandson. If he wanted to become a writer, what advice would you give him?

Elgon: Honestly, I’d steer him toward doing anything else. But if he inherited the gene, that’s not an option. Writing can be rewarding but it’s usually a lonely profession. If he decides to pursue it, I’d tell him to read a lot, read something every day before ever trying to write a story. I’d tell him to learn the different ways authors present their stories. Too many times writers get down in the weeds of whether this or that is correct instead of focusing on what best conveys the idea or expresses the message.

Sometime between the 7th grade and the 10th grade, I think you know whether you’re going to be a writer. Your teachers may or may not realize it, but you know you have the bug.  You’ve spent a lot of time and effort in school assimilating the basics of sentence construction and learning how to put together a paragraph. Writing a story is a matter of continuing from one idea to the next until it feels completed.

I’d tell him that he needs to expand his vocabulary, because honestly each word exists for a reason and few are interchangeable in capturing what one needs to say. Don’t misuse the thesaurus. I’d tell him not to put too much pressure on himself, just write something everyday and see where the journey leads. And have a backup plan for making enough money to live on because it’s tough out there.

Nola: Some writers have bad habits they must edit out of their writing or writing process (I overuse the word ‘that’). What habit have you had to break?

Elgon: I’m told my writing tends to be too conversational, which I don’t see as a bad thing. It makes it easier to read, I think. But I overuse very, actually and really. I go through my manuscript before submitting it and search for those words and decide whether they are necessary. Every writer has a pattern for their author’s voice. It helps get the story out. But it needs to be adjusted so that it is most effective in conveying the story to a reader. A good editor can help.

Nola: What does your writing process look like? (Do you have a special spot or routine?)

Elgon: I can write anywhere at any time. It hasn’t always been that way, but I have learned to do it. It’s good because I have moved around a lot in the past few years since becoming a full-time author. Having said that, I have a place where I always write, at my desk. I have a laptop, but the only time I use it as a portable device is when I am traveling – as in going to visit someone for a few days. I write best first thing in the morning. That doesn’t mean it’s the only time I write, just that’s when I usually do it. I tend to edit or revise in the evening.

Nola: You’ve just launched a book out into the world. What project is on deck for you?

I have several manuscripts I’ve submitted to Pandamoon Publishing. The next one in the pipeline is the first of The Wolfcat Chronicles. There is also a third book of The Thuperman Trilogy that should be going into edits soon. And there is a sequel to Fried Windows.

My current project is a paranormal detective thing that is set in the same universe as FRIED WINDOWS and BECOMING THUPERMAN. In fact, Brent Woods and the adult versions of Will and Sandra appear in the book, though they aren’t the main characters. This one is about a badass cop who has a knack for solving tough cases.

Nola: Let’s get controversial: Tacos or pizza? Tea or coffee?

Elgon: Taco Pizza! Why is that not a thing?  And it’s tea. I don’t do coffee. I may be the only writer I know who doesn’t have an affection (if not addiction) for coffee, but I never developed the habit. I got used to drinking tea when I was in Asia and, even if I don’t have a habit of drinking it either, whenever I order something with a meal at a restaurant, it is unsweetened tea. I’m weird like that.